This was a three year project funded by the ARC for the period of 2009-2011. The aim of the project was to explore the potential of integrating the latest developments in structural optimisation and computational fluid dynamics (CFD), for the optimisation of building structures subjected to wind loading.
A systematic study of wind drags on high-rise buildings of various shapes was carried out using advanced CFD techniques. It was found that by increasing the number of sides of a polygon, the drag coefficient of the extruded tower would dramatically decrease and eventually approach to that of a circular tower. We also observed a consistent reduction of the wind drag when round corners are applied to the polygonal cross-section and when the radius of the round corners is gradually increased. We have simulated the wind loads on straight and twisted high-rise buildings using both steady-state and transient CFD analyses. The effect of twisting the building tower on the wind loading was investigated. It was found that there is not much difference in the along-wind drags on the straight and twisted buildings. However, a significant reduction of the cross-wind loads has been observed for  the twisted building.
As the wind flows past a straight tower, vortexes form and shed periodically at a constant frequency in the wake. The resulting cyclic crosswind load will cause vibration of the building. By twisting the tower, the vortex shedding becomes “disorganised” and hence the harmful cross-wind load effects are significantly reduced. The project team implemented the latest BESO techniques in the ANSYS environment so that the CFD simulation of wind loading could be seamlessly integrated with the structural optimisation procedure. Promising results have been obtained for an optimal bracing system for a twisted building by considering wind loading from multiple directions. 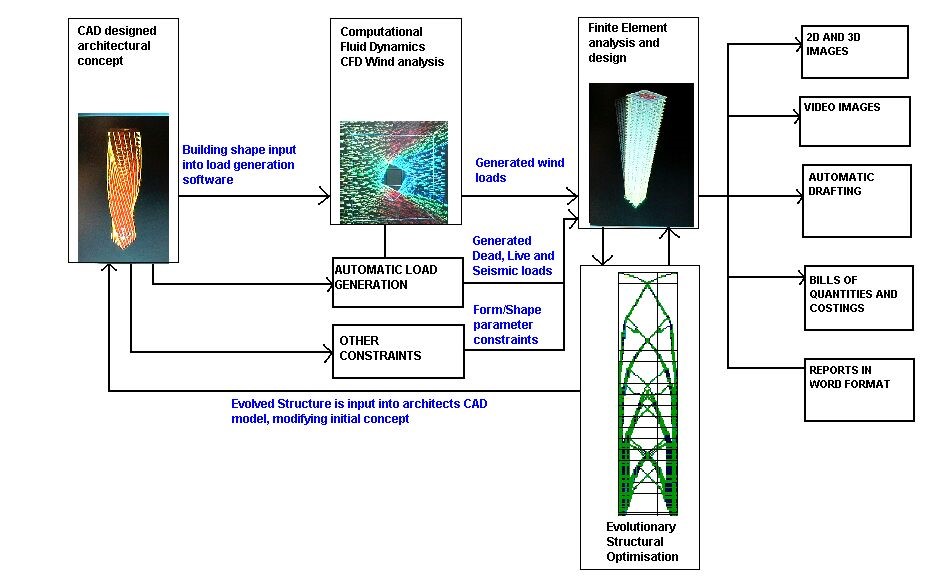 Traditionally the conceptual design of a building is determined by the architect prior to any wind analysis or structural design. The structural engineer will then determine wind loads on the building based on code coefficients, and convert dynamic wind loads into equivalent lateral static loads. These loads are generally conservative, and the building shape is idealised as a rectangular elongated box. Following are some criteria that are important in designing for wind:

1. Strength and stability 2. Fatigue in structural members and connections caused by fluctuating wind loads 3. Excessive lateral deflection that may cause cracking of internal partitions and external cladding, misalignment of mechanical systems, and possible permanent deformations of non structural elements. 4. Frequency and amplitude of sway that can cause discomfort to occupants of tall, flexible buildings. 5. Possible buffeting that may increase the magnitude of wind velocities on neighbouring buildings. 6. Ind induced discomfort in pedestrian areas caused by intense surface winds. 7. Annoying acoustical disturbances. 8. Resonance of building oscillations with vibrations of elevator hoist ropes.

It is considered beneficial to undertake a wind tunnel test and analysis as it will accurately determine the wind effects compared to the code based loads. A scale model is constructed that models the building’s shape and the surrounding buildings and environment. Whilst this process will produce accurate and refined loads, it can only be undertaken when the architectural design and structural concept is fixed. Therefore it is a time consuming and inflexible process. There is also a lack of understanding by clients and developers of the role structural engineers play in the design, and the early benefit of their involvement. There is usually a large investment in the architectural design to meet building yields based on empirical design guidelines, which confines designs to traditional formats. By the time the structural engineer is involved design decisions are fixed, which can lead to inefficient structural designs, adding unnecessary costs to a project. Therefore we are seeking to develop methods in which architects and engineers can use quickly digital techniques to design structures for wind actions, at the conceptual stage. This will lead to greater design opportunities, greater innovation, and efficiency in the use of building materials.

Computational Fluid Dynamics, usually abbreviated as CFD, is a branch of fluid dynamics that uses computational numerical methods and algorithms to solve and analyse problems that involve fluid flows. Computers are used to perform the calculations required to simulate the interaction of liquids and gases with surfaces defined by boundary conditions. With high speed supercomputers, better solutions can be achieved. Ongoing research yields software that improves the accuracy and speed of complex simulation scenarios such as turbulent flows. Validation of the software results are still required by undertaking wind tunnel testing. The benefit of CFD in the early stages of design is that wind loads on buildings can be determined relatively quickly, allowing the designer to explore various design options prior to finalising the  design for Wind Tunnel testing.

Evolutionary Structural Optimisation (ESO) A Finite Element technique developed by Professor Mike Xie in the 1990’s based on the concept of slowly removing inefficient materials from a structure so that the residual structure evolves towards an optimum. Bi-Directional Evolutionary Structural Optimisation (BESO) The validity of the ESO method depends, to a large extent on the assumptions that the structural modification (evolution) at each step is small and the mesh for the finite element analysis is dense. If too much material is removed in one step, the ESO method is unable to restore the elements which might have been prematurely deleted at earlier iterations. In order to make the ESO method more robust, a bi-directional ESO (BESO) method was proposed in 1999 in which material can be added to and deleted from a structure simultaneously.

We selected a “skinny” tower of 16 stories with a 8m x 20m building plan as an appropriate model to optimize for wind loading. We fixed the floor plates and the building core as “non design” elements. i.e elements that could not be modified through the optimization procedure. Between the floor plates there was an initial “design” domain of finite elements. After applying the CFD technique in a continuous loop with the Evolutionary Structural Optimisation (ESO) software as resulting optimised geometry was realized for the building. The result was then 3d digitally printed.

This second project was an examination of the possibilities of applying the technique to a 100 storey building. A number of studies were undertaken with regards to looking at bracing options. Firstly through bracing the outside skin of the building, and then by optimizing a belt truss solution. Further studies were undertaken with regards to optimizing foundation pile layout.

Firstly a finite element model is created, and wind loads are applied to it using CFD modelling from 4 directions, north, south, east and west. The resulting forces are automatically fed into the optimisation model.

PART B: Optimisation of the topology of the External bracing to the tower including the stiffness of the central core

In the diagrams above the blue element are the floor plates. These are non design elements. i.e. it cannot be eaten away. The white elements are columns, which are again a non design element. The yellow elements are plate elements that initially cover the overall external facade and are gradually removed until the optimal shape is derived.   The resulting geometries now allow an architect to refine the design to suit the particular programmatic/design requirements of the project.

PART C: Considering a Belt Truss Stiffening System, Optimisation of the geometry of each of the belt trusses

This investigation sought to opimise the number of and geometry of a series of belt trusses.

PART D: Optimisation of the Pile layout to account for wind and gravity forces

By adopting an initial grid of piles, then applying the CFD wind loads and running the optimization procedure an optimal pile layout was developed that accounted for the particular loads and stresses applied to the building. This would lead to a significant cost saving to a project.